Our sense of perception when it comes to numbers is, generally speaking, appalling. We hear terms like hundreds of thousands of years, millions of years, hundreds of millions of years and billions of years, and although we appreciate that these numbers are different, it’s rare that we comprehend by just how much they differ. I think part of it has to do with our natural tendency to simplify numbers, as in, four centuries, four thousand years, four million years, four billion years. Sure, they’re big numbers, but they’re prefaced by a small number, four. It seems our cognitive process tends to reduce these immense numbers to a simple concept, after all, a number expressed in words is just a few letters. Numbers expressed using digits, at least, makes sizing a little more obvious, although the difference between a million and a billion is just a few more abstract zeros – 1,000,000 or 1,000,000,000. And so it is easy to lose sight of the immense spans of time that have gone before us in history. As few of us will ever live to see three digits in our own age, it’s not that surprising that six digits or more is somewhat baffling for us to comprehend.

Sometimes, images speak louder than words, as does this image, comparing the emergence of life over the last four and a half billion years to minutes in a day. 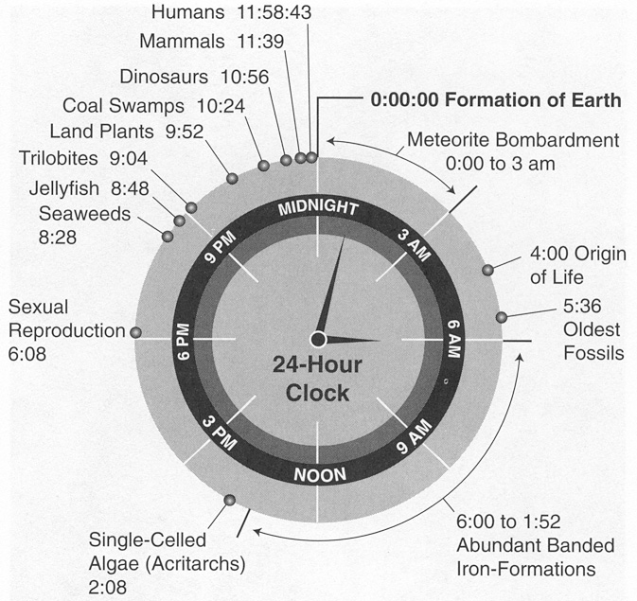 To put this in perspective, on this scale, the reformation happened one second ago. Christ walked the Earth four seconds ago, just a few milliseconds after Aristotle, Plato and Archimedes. The pyramids were built in the last fifteen seconds, so that’s all of human civilisation crammed into roughly the time you’ve spent reading this particular paragraph. At the 11:58:43 noted above, Homo sapiens had probably just emerged in their own right, after having wiped out the Neanderthals. It’s a lot of time to us, but barely 78 seconds on our clock.

British astronomer Fred Hoyle once famously declared that the probability of cellular life evolving was so highly improbable as to be compared to a tornado hitting a junk-yard and randomly forming a fully functional air-plane. For decades, I thought this was a convincing argument, as the appearance of design in nature is compelling, but it is an illusion. We see design because we are designers, but consider other, uncontroversial systems that have an intrinsic beauty and complexity without deliberate design.

Stars may seem simple, just a ball of hydrogen burning in space, but nothing could be further from the truth. Stars are comprised of a variety of convective and radiant layers, with fusion occurring at rate that allows them to shine for billions of years, slowly converting lighter elements into heavier ones, like the fabled alchemist. They have life cycles, analogous to birth, middle-age and death. There are classes of stars, generations of stars. They have complex interactions with their environment, simultaneously forming planets, comets and asteroids during their own fiery birth. From producing solar winds, to pushing up bow waves through deep space, stars are remarkably complex systems, and they’re entirely natural. The same is true of planets, like Jupiter and Saturn, with their beauty and complexity devoid of any design. Life, some would argue, is different to an inanimate system, and that’s a fair point. Life extends the concept far, far more than any inanimate system, but it is an extension, not an entirely different notion. No rational person would content that God created asteroids as disfigured lumps of rock in space, they simply formed that way according to natural laws. In the same way, so did planets, and stars and life, as they all share the same chemical composition, it’s just their arrangement, complexity and ability to replicate that differs.

Going back to Hoyle’s tornado, and looking at our clock, there’s an interesting observation we can make. Look at the vast stretches of time involved in our one day analogy. Life originated in the dark night. By dawn, there’s simple forms of life capable of leaving fossils for us to uncover billions of years later. Not a lot happens from dawn till dusk. Our day seems pretty boring. In reality, evolution is inching forward, slowly accumulating gradual change, and so, after lunch, we’ve got single-celled algae. Do you know how remarkable that is? How astounding something as simple as algae are? They’re the basis of all plant life, applying photosynthesis to transform Earth’s atmosphere into the wonderful, breathable, oxygen-rich environment we enjoy.

By early evening, sexual reproduction is occurring. Apart from the wonderful benefits that has brought to us Homo sapiens roughly a billion years later, there is a very serious side to sex. Sex represents a unique way of distributing genes throughout a population. It’s a significant step forward in evolution, improving the quality of genetic material being passed from one generation to the next.

But, have you noticed something odd? Our junk-yard tornado is moving with the speed of a light breeze blowing against a gate. We’re billions of years along the path to the kind of complex life we see around us today, and yet there’s nothing to write home about yet. If an alien astronaut was to visit Earth at this point, it would be a bland experience. Lots of activity at a microscopic layer, but nothing at the macroscopic layer we consider so important. It’s still hundreds of millions of years before we get life as simple as seaweed!!! Millions of years after that, the invasion of the jellyfish begin, only the jellyfish find there’s not too much in the way of competition for millions of more years. I don’t know about you, but I’d be in bed asleep before dinosaurs arrived on the scene just before 11PM. If it was New Year’s Eve, we’d be popping champagne and singing Auld Lang Syne, getting ready to countdown to midnight when humans finally came to the party.

You see, Fred Hoyle’s Tornado junk-yard 747 analogy is not a reflection of reality. In fact, it ignores reality. Life evolved slowly, gradually, at a pace that, for most of the actual time involved, would have been barely recognisable as progress at all. I can understand why people are sceptical about evolution, because it occurs so slowly it is nigh on impossible to recognize within our lifetimes (although Lenski did). And yet, relative to the last four billion years, it is racing along at the moment. You think evolution is slow now? You should have been here when algae was formed. LMAO.

3 February 2012 -Edit- To clarify, the rate of evolution actually hasn’t changed at all over billions of years, as is demonstrated by the molecular clock, but as gradual changes have accumulated in various branches or streams of development, the observable effect of evolution compounds over time, and so we have a hockey stick type effect, where a long tail leads over billions of years to a sharp increase over 500 million years, as a “runaway effect” occurs. Only our “runaway effect” is still really, really slow from the perspective of man. In other words, more genetic diversity gives rise to more change across a broader range of species, that rate of change, though, is largely the same. It’s a bit like giving your kid’s soccer team a bag of oranges at half time in a game, lots of oranges will be peeled by the players, but no one player will peel theirs that much faster than anyone else.