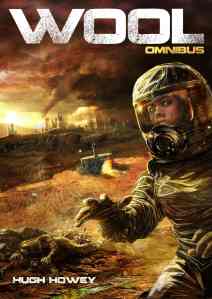 Less than a year ago, Hugh Howey was playing around with a what-if dystopian idea and wrote a fun short story called Wool that was to change the course of his writing career. To his surprise, Wool caught the attention of science fiction readers on Amazon and quickly racked up a host of positive reviews. Hugh found himself fielding requests for more, so he extended the concept and wrote four additional stories before combined these into a single edition that has gone viral. Well, not viral in the sense of a youtube video about a stuffed cat being turned into a helicopter, but viral in the literary sense that Wool has become a book on everyone’s reading list.

I read Wool while it was still under construction, and joined the list of eager readers awaiting the next instalment, so I’ve followed the meta-story of Wool’s rise in popularity with some interest. Within 12 months, Wool has gone from a curious experiment by an independent sci-fi writer to being picked up by a major publishing house in the UK, with film rights being sold to Ridley Scott. It’s an Indie writer’s dream come true.

But what made Wool so successful? I think the answer is simple; engaging characters in a story about triumph over institutional deceit and corruption. The main character’s world is shattered, but she never loses her innocence and desire for justice, so you can’t help but sympathise with her and the trials she endures. Wool keeps readers on the edge of their seat with a good deal of suspense as the final outcome is never clear, and that’s something I hope comes across well in the movie.

Check out this mock-up trailer produced for launch the book in the United Kingdom.

PS. Ignore the URL at the end of the video, the site you want to go to is http://thisiswool.co.uk/

4 thoughts on “Are Electric Sheep Made of Steel Wool?”