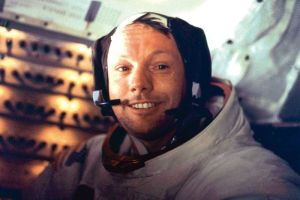 We are, by nature, competitive and somewhat obsessed by firsts. Whether it’s Olympic gold, the first man in space, the first man on the moon or the first person to climb Everest, to be first is culturally a crowning achievement.

Somewhat ironically, though, those that have been “first” are among the few who see through this illusion. When asked who first stepped foot on the summit of Mt Everest, Sir Edmund Hillary refused to answer, noting it was a joint-effort, that he could not have accomplished the feat without Tenzing Norgay. Expedition leader, Colonel Hunt, also noted, “They reached it together, as a team.” In the same way, Neil Armstrong shunned the notion that he was “the first man on the moon” or the “first man to walk on the moon” noting that whether it was the thin hull of the Eagle or the rubber sole of their boots, neither man actually touched the moon. Both Neil and Buzz landed in the Sea of Tranquillity at the same time. They were the first men on the moon.

Although Neil and Buzz ventured down to the moon in the Eagle, Armstrong, Aldrin and Collins and a whole host of other astronauts all put their lives in jeopardy for the sake of human exploration, to further our scientific knowledge of the moon and man’s ability to explore space. This in no way detracts from Neil Armstrong’s accomplishment as commander of the mission, but it puts it in a perspective he himself endorsed, that the lunar landing was a team effort.

When it comes to the actual landing, flight analyst Morris Jones notes.

Other astronauts could have landed but he was really the best choice and sometimes I think without him they wouldn’t have landed on that attempt. They would have got home safely but probably would have had to abort the landing and try again. Armstrong played a critical role in making that landing succeed.

Neil Armstrong’s heart was racing at 150 beats per minute as he sought to land the Eagle clear of a boulder field in the Sea of Tranquillity. Neil and Buzz sounded unusually calm during the descent, their professionalism taking priority over their nerves as the fuel gauge within the Eagle ran to empty. They touched down with just seconds to spare, making history as the first men to visit another celestial world.

Armstrong, Aldrin and Collins were at the tip of the most remarkable scientific technological endeavour in the history of humanity, the culmination of tens of thousands of scientists and engineers working together toward a goal that was decades ahead of its time. It took a remarkable amount of courage to strap into a Saturn V rocket built using slide-rules, pen and paper and a computer system that pales in comparison to today’s mobile phones. 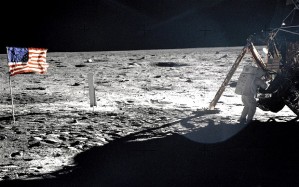 Neil Armstrong will be remembered as the lead in this outstanding accomplishment, and for his historic comment, “That’s one small step for man, one giant leap for mankind.” Those eleven, brief words capture the essence of Apollo.

Although critics would note that NASA has not repeated the achievements of its glory days, I’d argue that the critics are wrong, that they’re looking at US space accomplishments from only one, narrow perspective.

I would rate the launch of Pioneer and Voyager, the advent of commercial satellites, the establishment of SETI, the reach of Viking, WMAP, the Allen array, the Hubble space telescope, the Curiosity mission to Mars, Cassini, the proposed James Webb telescope, etc, as extending mankind’s giant leap. In fact, I’d struggle to find a single space exploration project, either by NASA, the Chinese, the Russians or private enterprise that hasn’t made a significant contribution to mankind’s progress in space. Perhaps they’re not as epic as Armstrong and Aldrin walking on the moon for the first time, perhaps some of them are more incremental, but they all take us forward into a new phase in the history of mankind, the space age.

I’m thankful for men and women like Armstrong, Aldrin and Collins who have pushed back the bounds of the unknown, who reached out to explore and understand the cosmos. Be it a computer server crunching radio telescope results in the basement at SETI or a rover sitting on Mars, be it someone walking again on the moon or SpaceX launching commercial resupply for the International Space Station, we are continuing to step forward into a bold, new future. Neil Armstrong’s one small step continues to inspire humanity to leap forward.