Last year, I wrote a blog post called Dr Evil Hijacks Martian Satellite in which I talked about NASA’s HiRise project for budding citizen scientists. In association with the University of Arizona, NASA has crowd-sourced suggestions for targets of interest for the Mars Reconnaissance Orbiter.

I am astonished and humbled that NASA would make this publicly available to anyone with an interest in Mars. It is a privilege to be part of the exploration of Mars in this manner.

Mars is as dry as a bone. One of the key questions on the path to determining whether life has ever existed on Mars is understanding the role of water on the planet. So in selecting a target for HiRise, I wanted to explore a region that might reveal something of the planet’s possible watery past.

With pressures and temperatures below or just at the triple point of water, Mars cannot sustain liquid water on its surface for any length of time. If you’ve ever been to Colorado and boiled water for a cup of tea, you’ll know that water boils in the Rockies at a lower temperature than you’d expect, somewhere below 90c/200F depending on elevation. This is because of the lower air pressure at these heights. On Mars, the atmospheric pressure is so low water either “boils” at near freezing or just sublimes from ice into vapour without ever becoming a liquid (just as dry ice does on Earth). With enough salts, liquid water can exist on the surface of Mars, but it will evaporate rapidly.

If the concept of water boiling without being hot sounds a bit too bizarre to be real, you can try cold boiling water in your own home with a syringe.

In light of all this, I submitted a candidate on the edge of the Hellas basin that looks particularly interesting as it appears to be a dried-up lake bed. The western wall of the lake appears to have collapsed at some point in the past, and the runoff has scoured the land. To my delight, NASA took my suggestion and snapped some holiday pics, so here they are, with my rather amateur observations. 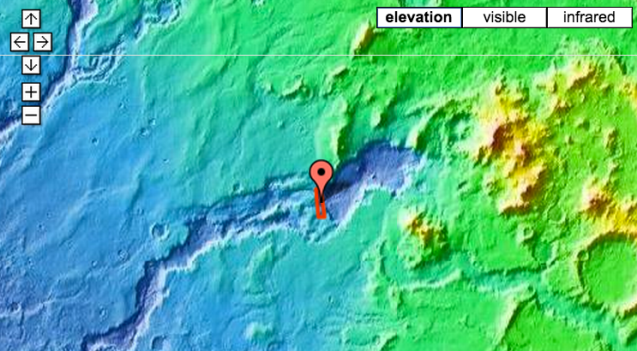 The false colour in this image indicates elevation, so the yellow peaks are the highlands, the green isn’t a grassy field, it’s simply the midlands, while the blue descends into the Hellas Basin. The target I proposed looks at what appears to be an ancient lake wall several hundred meters high that has collapsed and run off into the basin before drying up completely.

Most of the depressions you see on Mars are the result of meteor impacts or fractures in the crust. In this case, though, the deep blue depression is too irregular to be the result of an impact, and too broad for a fracture. It may have started out as a string of craters, but its irregular shape suggests alluvial influences, the presence of a large body of water that has triggered sedimentary behavoir.

Look at the “seam” running horizontally in the middle of the “lake bed” between the two cliffs to the north and south. This crease is roughly parallel with the northern cliff and is reminiscent of the run-off deltas we see on Earth, with channels eroded at the deepest point as sediment accumulates. Also, look at the roughly uniform depth of the “lake bed,” and how smooth sections of the bed are.

When lakes dry up, water slowly recedes from the walls, gathering in the depths. Any inflow will run in channels, forming deltas, curling around accumulated sediment. This image, from Lake Mills near Seattle, shows these characteristics in beautiful detail, along with clearly defined lake walls with a steady, smooth gradient. This is precisely what we see in the HiRise photographs, minus only the water.

Our target region straddles the depth of the “lake bed,” the “lake wall” and a region where the lake burst its banks and the run off eroded vast channels that lead down into the Hellas basin.

Here are the results from HiRise. This image spans about roughly 15-18 miles. I’ve rotated the image counter-clockwise so it fits easily in this post, but you can find the original image here.

The assumed lake wall shows up in dark shadows, running from bottom-left and stretching across to top-right. You can see a clear distinction between the smooth, previously submerged regions, with their eroded, softened shapes, and the more coarse, high ground to the right.

Remember, when looking at Mars, we’re seeing overlapping geological features that span hundreds of millions to billions of years.

The “tiger strips” on the proposed lake wall are more recent erosion, where gullies roughly a mile long have been worn away by aluvial erosion. NASA suspects this is typical for subterranean salt brines thawing in the Martian spring. The false-colour images of this section on the HiRise site show the accumulation of clays at the base of these gullies, showing how heavy materials have been carried away by liquids.

Note the three wavy channels at the base of the lake wall, sprawling across the dried-up lake bed. These channels are reminiscent of the channels we see forming in Lake Mills here on Earth, and represent water still flowing into the lake while it is drying up and shrinking in size.

The following image, from inside the lake bed, shows large, previously submerged knolls (at least, that’s my proposition). Look at how smooth the sides of the hills are, and the steady gradient down to the lake bed. You can also see well-defined channels between the knolls, with creases matching the flow of water.

This next shot shows the outer wall of the lake and the highlands beyond (bottom left). Notice the distinct boundary between the two regions.

In this final picture, you can see the highlands on the left edge of the image, and the more recent erosion caused by subterranean water melting in the spring. But it’s the smooth knoll on the lake bed that is most telling. I was sceptical about water existing in huge quantities for an extended period of time on Mars because of its low gravity, lack of a planetary magnetic field and thin atmosphere, but for this knoll to have been eroded within a lake bed implies it was submerged and subject to currents for a considerable period of time.

Hey, I’m an amateur, so I may be well wide of the mark on this, but these relatively smooth regions within a depressed irregular basin on Mars look distinctly like a dried-up lake bed to me. Could life have flourished in such a region as this? Well, Mars Curiosity is wandering through Gale Crater looking to answer exactly that question.

On Mars the globally-averaged surface pressure of the planet’s atmosphere is slightly less than 6.1 millibars, which sits right on the triple point of water. But, being an average, there are areas like the Hellas Basin that have up to twice the air pressure, meaning water could theoretically exist on the surface there. For more information, check out this article by NASA.

10 thoughts on “Postcards from Mars”