Is Pluto a planet?

My heart says yes, my head says no.

Pluto is an oddball, of that everyone can agree, but is it a planet?

At first glance, the concept of a planet seems pretty straight forward: Big round thingy swinging around a star, but there’s more to it than that, as there’s lots of stuff orbiting stars, including comets and asteroids.

Pluto’s small on the planetary scale, and therein lies the problem.

In addition to this, there are several other objects in the Kuiper belt, like Eris (formerly Xena), that are the same size as Pluto or larger and we don’t consider these planets.

And yet comparisons are a slippery slope. If we make the same comparison between Earth and Jupiter, then Earth’s circumference is 10x smaller than our Jovian giant, while Earth’s mass is an astounding 320x smaller, so does that make Earth a dwarf planet? It’s a good question when you think about it.

The International Astronomical Union (IAU) struggled with Pluto’s planetary designation for over a decade before finally relegating Pluto as a dwarf planet.

According to the IAU, a planet is:

The problem with this definition is:

Regardless, the IAU decided that Pluto’s inability to clear out its surroundings and its disproportionally large moon Charon, disqualified it from planethood (if there is such a term) and so Pluto was designated a dwarf planet.

Truth be told, even that category is generous, and leans more on the historical position of Pluto than it does on any of Pluto’s physical characteristics.

Pluto is a cosmic iceberg.

As best we understand Pluto’s composition at this time, Pluto doesn’t have the iron core we associate with regular planets and is probably a mixture of rock and ice. 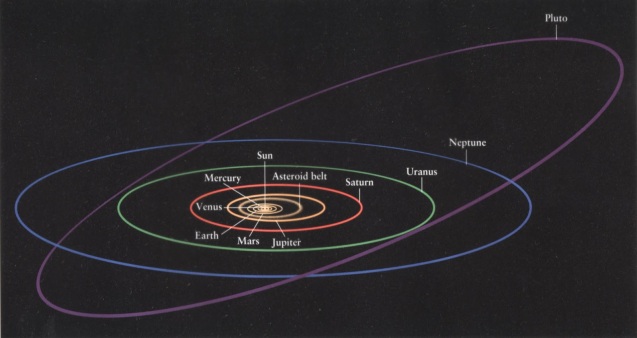 Given its composition and its highly irregular orbit, which is tilted by 17 degrees relative to the rest of the planets and how Pluto’s orbit cuts inside the orbit of Neptune from time to time, NASA even suggested Pluto may be a “failed” dormant comet. “Failed” in that it never got close enough to the Sun for its volatiles to give it a distinct comet tail.

Had Pluto fallen into an orbit that took it into the inner solar system it would have been the most spectacular comet of all time. And being accompanied by its icy moon Charon, Pluto would have had a highly irregular coma that may have appeared to vacillate over a period of six days (being the orbital period of Charon).

Pluto might not make much of a planet, but it would have made a sensational comet had its orbit taken it closer to the sun.

If you’d like to learn more about Pluto, check out Vintage Space.