Over the past few years there’s been a revolution in self-published novels, and it’s far from complete, but it’s healthy and vibrant thanks to Amazon.

Like Hewlett-Packard, Microsoft & Apple, Amazon started in a garage before growing into a multi-national corporation with a staggering US$74 billion dollar turnover in 2013.

Like any large corporation, Amazon has had a checkered past, with claims of tax avoidance in the UK and allegations of poor working conditions in its numerous warehouses.

You can’t accuse Amazon of being a wallflower. It’s an organization with clear goals and aggressive drive, learning from its mistakes and pioneering new markets, such as independent publishing.

Call me naive, but I think Amazon is an intelligent, progressive organisation. Ah, I can hear the cynics already crying, “Amazon’s only after one thing, shareholder profit.” Maybe. Maybe not.

In 1970, Milton Friedman popularized the notion that companies exist for the sole reason of making profit. Even on the surface, such a position is clearly flawed as it says the only moral in business is money. Certainly, there have been plenty of examples of this, from the Wolf of Wall Street to the infamous example of GM pennypinching on the safety of the Corvair, but that doesn’t make it a correct assertion. Hollywood popularized this notion with the idea that greed is good, and in recent years we’ve seen the rise of the Occupy movement to try to curb this destructive notion.

Friedman’s comment has been called “The dumbest idea in history.”

In reality, the only reason for a company to exist is to serve the customer. For all the criticisms of Amazon, this is one area in which everyone agrees Amazon excels. Amazon puts the customer first.

And this is where things get interesting…

Amazon started as a company specializing in distributing CDs, books, software, etc, and it never lost sight of its role as a book broker. When Sony produced the first eReader in 2004, Amazon saw an opportunity and came out with the Kindle in 2007.

At the same time, Amazon launched KDP – Kindle Digital Publishing and began a journey of transforming independent publishing from a vanity press to a legitimate platform for all authors worldwide.

Why Kindle Will Change the World

A decade ago, Amazon was considered little more than a virtual version of Barnes & Noble. Now that it’s arming writers with the tools to put their work on those virtual shelves, it’s about more than just stocking a virtual superstore with best-sellers… Kindle owners aren’t cradling dinosaurs. They’re cradling tigers.

Amazon launched the Kindle knowing they were launching a revolution in publishing.

Even in its infancy, KDP had a clear vision of liberating writers, and that’s quite profound. The Amazon Kindle was never about replicating the existing book market in an electronic format. From its inception, it was about transforming the literary world by freeing writers from the shackles of a few great publishing houses. Kindle and KDP have always focused on opening the door to new voices.

Publishing houses have traditionally been the gatekeepers of books, but that’s changing. Now the gatekeeper is the reader, and that’s a remarkable transformation.

Amazon’s focus on the customer has taken publishing in an unexpected direction, giving writers their independence.

Critics point out that publishers act as the gatekeeper on quality, but readers can do that better than any publisher. Sure, there are a few bad apples that game the review system on Amazon, but you can download a free sample if you’re suspicious, or you can get a refund within a week. And fake reviews invariably backfire, as real readers will object and ensure their voice is heard.

There is a role for publishers, but it’s not to be the gatekeeper as that invariably leds to a narrow focus on what publishers think is marketable, and it’s not necessarily what writers and readers want to explore.

I’m an example of an author that has thrived as an indie. I’ve got eight books and a bunch of novellas. I’ve sold 40,000 copies, and yet publishers and agents still turn me away. Go figure!

Anomaly – One of the best books I’ve ever read

Little Green Men – Peter Cawdron has limitless imagination. When you read this book it transports you to a whole different world

And publishers claim they’re the gatekeepers? Really? These readers, and hundreds more, all disagree.

Without Amazon, I wouldn’t be a published author. Yes, that’s right, I have the audacity to claim equality with any other published author, be that independently published or through a publishing house. There is no difference.

Writers need to be published to grow. Without the feedback mechanism of readers reviewing and critiquing their work, it is impossible to develop as a writer.

Recently, I made the decision to make my top four books exclusive on Amazon at a time when other authors are telling me I should be with Kobo, Google Play, Apple, etc. Why? Because I appreciate what Amazon has done for me personally. Yes, others are coming to the party, but Amazon treats me like Neil Gaiman. Amazon gives me access to the exact same platform as Hugh Howey or Stephen King. Amazon doesn’t care if I sell one book or one million. I still have books with Smashwords, and they too are the author’s friend, but Amazon continues to champion the indie cause.

At some point, I hope to be picked up by a traditional publisher (although I’m probably not helping my cause with this blog post), but I’ll always have a soft spot for Amazon. When others were cheerleaders standing on the sidelines, Amazon was in the game with me, helping me to succeed.

Say what you will about Amazon, but without them, the indie revolution would be dead and my writing would be stuffed away in a desk drawer. 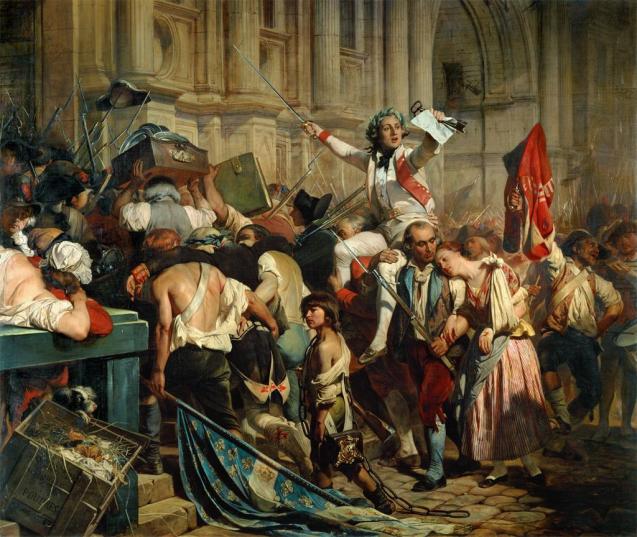 Picture credit: Hippolyte Delaroche, The Conquerors of the Bastille, 1839