Is there life in outer space?

Although there’s plenty of conjecture in the media and a host of imaginative science fiction stories on this subject, we already know the answer to this question.

Yes, there is life in outer space!

There’s no uncertainty, no doubt, no question at all. Life exists in outer space. Earth itself is definitive proof that life can thrive in the harsh environment of space.

At first glance, such an answer might seem disingenuous, as what people really mean when they ask, “Is there life in outer space?” is … “Is there any other life?” but this is a genuine answer. Our universe is a harsh, hostile environment, and yet life has flourished with astonishing diversity on at least one planet—Earth.

The answer to the question, “Is there any other life in outer space?” is “We don’t know, but we have no reason to think there isn’t.”

In the 16th century, Nicolaus Copernicus first established that the Earth revolves around the sun. The single biggest hurdle he faced in promoting his heliocentric theory was that everyone assumed the Earth was special. Earth wasn’t “just another planet” like Mars or Venus. Earth was the center of creation! Copernicus proved otherwise. 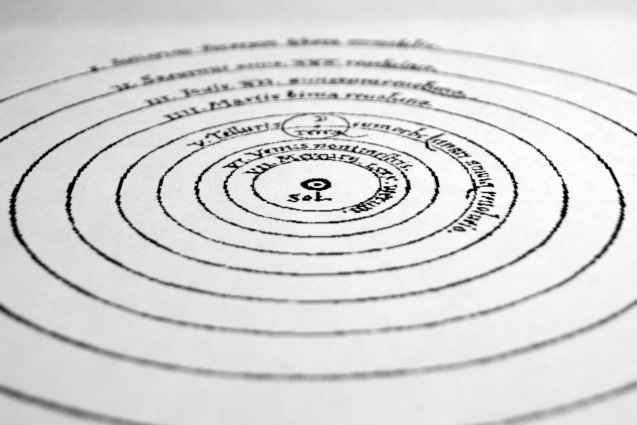 Even now, five hundred years later, people still struggle with Earthism (if I may be allowed to coin such a phrase) assuming Earth is somehow special and unique in the heavens. The reality is, Earth is a rather small planet in orbit around an unassuming star in a modestly sized, nondescript galaxy.

Everything we’ve learned about astronomy suggests there are a ridiculously large number of similar, Earth-like planets out there, perhaps as many as 40 billion in our own galaxy!

There are at least two hundred billion galaxies in the visible universe, each with hundreds of billions of stars. Each of these stars can potentially host dozens of planets.

Earth is as unique as a snowflake, but so is Mars, Venus, Jupiter and Saturn. Contrary to popular belief, snowflakes are somewhat identical when they form and, as wonderfully varied as they are once they reach the ground, they’re not entirely unique.

Earth is astonishing and beautiful, but it is no more or less important or unique than any other planet. Consider the other planets in our solar system, Mercury, Venus, Mars, Saturn, Jupiter and the rest. They may lack complex life but they’re just as extraordinary as Earth, and there’s a distinct possibility that the moons of Saturn and Jupiter could harbor microbial life!

In the 1950s, Enrico Fermi looked out at the stars and posed the question, “Where is everybody?” Fermi had done the math and realized given the size of our galaxy and how long it has been around, we should see the Milky Way teeming with life.

Fermi’s Paradox has become a mainstay of astronomy ever since, with scientists trying to understand why the heavens are silent, and yet the answer may be surprisingly simple.

Seth Shostak, in his non-fiction book, Confessions of an Alien Hunter, points out how astonishingly difficult and time consuming it is to search through space.

Seth gives the analogy of someone sitting next to a haystack, sifting through a thimble full of hay looking for a needle to highlight how little we have accomplished in our search for extraterrestrial intelligence. Only this particular field we’re sitting in has at least two hundred billion other haystacks!

Space is unimaginably big. The average star seen with the naked eye is roughly a hundred light years away, and yet the distribution of stars that make up our galaxy spans a hundred thousand light years!

On the darkest night, we see only a tiny fraction of the stars in our own galaxy, something like 0.000005% of the stars out there. 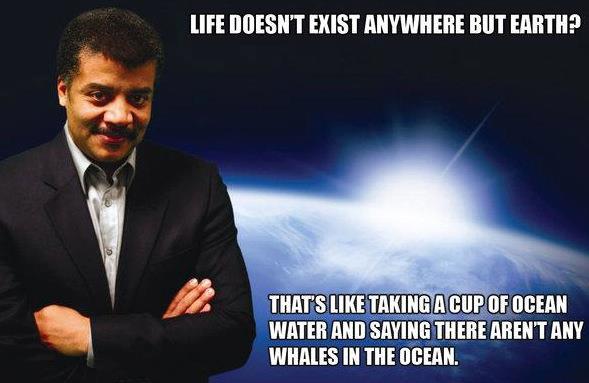 Look out at the stars tonight and the chances are the starlight falling on your eyes first radiated into space before you were born. That light has been racing through space over the course of your entire life, only to arrive now and register in your eyes for a fraction of a second.

Rather than working against us, First Contact is going to be extremely one sided in our favor, and the reason is simple—we will detect ET long before ET detects us.

Remember, looking into space is akin to looking back in time.

If we detect an alien civilization at the modest distance of 3,000 light years away then we will see that civilization as it existed 3,000 years ago. Should they happen to be looking in our direction, they’ll “see” us as we were in 1000 BC—King David ruled in Israel, the Assyrian empire dominated the Middle East, Rome wasn’t founded for another three hundred years.

ET would “see” a technologically silent planet with a curious atmosphere that they might consider a candidate for life, but they’ll have no direct evidence for intelligent life.

Even if our extraterrestrial neighbors can travel faster than the speed of light and can reach Earth in a relatively short period of time, they would still have no way of knowing there was civilized life on Earth for thousands of years to come. In short, we can see them, but they can’t see us.

In this way, emerging celestial societies, such as Earth, have an advantage over more technologically advanced societies in that we can eavesdrop. We can remain incognito as we learn about ET. 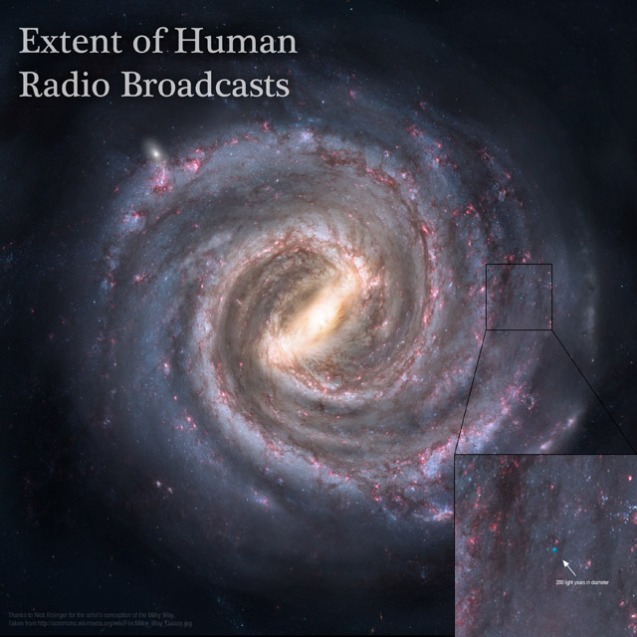 Picture credit: Tiny Humanity. Yep, that blue dot is as far as our radio signals have reached into space

If we detect an alien civilization anywhere beyond that tiny blue dot, they’re not going to know about us for a very looooong time.

Contact is somewhat of a misnomer. First Detection is more appropriate.

If we look at the kinds of signals broadcast by humans, some of the strongest signals come from “dumb” technology, things like weather radar or navigation radar at airports. There’s not too much that could be inferred from detecting such a signal from an alien civilization other than that the signal wasn’t produced naturally. If we picked up their equivalent, we’d know they were there, but it would take years to glean more than that.

More interesting signals, such as radio and television, are designed for local reception. Although such signals leak into space, they weaken according to the inverse square of the distance they reach—double the distance, quarter the strength, etc. As they’re not intended to span star systems, they’re going to be absurdly difficult to detect as they’ll be so faint they fade into the background noise.

ET may use some kind of point-to-point solution for communicating between planets or stars, something like a laser. Being effective over large distances invariably means there’s less leakage, less opportunity for us to eavesdrop. We would miss something like this entirely.

One hallmark of civilization is the consumption of power. Converting energy into usable power is notoriously difficult to do efficiently. Invariably, there’s always some kind of leakage. Engines are noisy, they get hot, etc, so when looking at the heavens we look for the telltale signs of industry. We may very well detect the heat signature of an advanced alien civilization before detecting their radio waves.

Picture credit: HALO – A Dyson sphere around a star would give off infrared radiation we could detect

Another possibility is a deliberate broadcast. In this scenario, ET recognizes the difficulty of interstellar travel and broadcasts his intentions either via radio waves (cheap to send) or by sending out Von Neumann probes (such as the monolith in 2001: A Space Odyssey). In essence, this is the equivalent of the time capsules we buried in grade school, leaving something for future generations to examine.

More than likely, though, First Contact/Detection will be accidental on ET’s part and not a deliberate message, and that will limit what we can learn from them.

First Contact is going to be a long, slow process, but it will change our outlook on life and the universe just as radically as the telescope Galileo first pointed at Jupiter.

When it comes to First Contact, we’re going to have to be patient.

Peter Cawdron is the international bestselling author of such speculative First Contact novels as ANOMALY, XENOPHOBIA and MY SWEET SATAN.