I’m highly skeptical about the prospect of life on Mars.

Mars has no global magnetic field to protect any fragile, budding life.

Whereas our magnetic field extends some 20 times the radius of Earth, Mars has little to no magnetic field, with just small, localized pockets. Not only does this mean the surface of the planet is bombarded with solar and cosmic radiation, but the solar wind strips away light elements in the atmosphere, leaving predominantly heavy gases like carbon dioxide.

In addition to this, Mars is considerably smaller than Earth.

Mars is closer in size to our Moon than it is to Earth itself, having roughly 1/3 of the gravity. This means it’s escape velocity is much lower, which also allows the atmosphere to bleed off into space, leaving the density of the atmosphere roughly a thousand times lower than ours at sea-level.

One day, no doubt, we’ll settle Mars, but it will take a gargantuan effort as Mars is not in any way conducive to sustaining human life. Mars isn’t the pick of the bunch, it’s the least lethal of a motley crew.

So why am I writing a blog post about the case for life on Mars? Because there’s something rather startling about the martian atmosphere that may be hinting at the possibility of life.

For decades, astronomers looking for life in outer space have spoken of The Goldilocks Zone, the habitable area around a star where life could arise on an Earth-like planet—an orbit where it is not too hot, not too cold.

Which of these planets looks hospitable?

Which one do you think is most likely to support life? 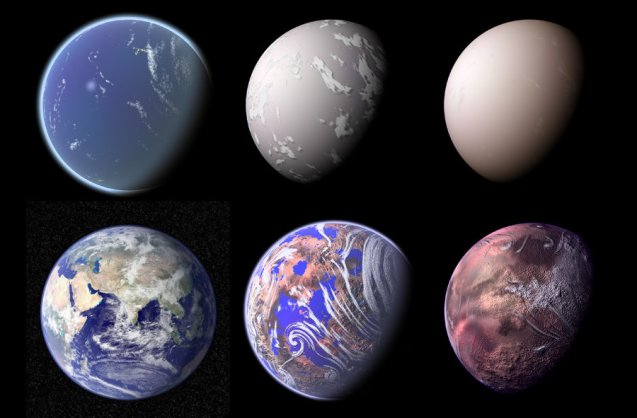 The answer is—all of them.

This image represents what Earth would have looked like at various points in the 3.8 billion years during which life has thrived.

Although Earth is in the Goldilocks Zone, it’s spent time bouncing between extremes, from sweltering temperatures to freezing cold ranges not unlike those found on Mars. Temperatures plummeted to -58F during the Snowball age. Even at the equator, the temperature is estimated to have been at least -4F, and yet life on Earth survived. On the hot side of the equation, there’s good reason to consider that life itself may have arisen on Earth when temperatures were reaching upwards of 300F.

One common retort of creationists when comparing Earth to other planets is, “Look at how perfectly suited Earth is to life. Look at how moderate it is compared to the hellish conditions on Venus, or the frozen wastelands of Mars.” But this fails to consider Earth’s dynamic history. Earth is perfectly suited to life, but that’s not by coincidence or providence. Life has transformed Earth. Microbes have taken an inhospitable planet with a choking toxic atmosphere and transformed it into the oasis we enjoy today.

Life is astonishing. Natural Selection has allowed life to exploit finely balanced chemical pathways. The free energy involved in supporting life tends to be around 3 kcal/mol, which is low, right on the borderline of what’s useful. Chemicals react. Chemicals react a lot. And when chemicals react, they produce reactants rather than being funneled into useful products, so life has evolved to avoid the startling reactions you’re used to in high school chemistry, instead it tip toes on the edge of a chemical cliff, at energies less than those required to break a hydrogen bond. That might sound overly complex (and a diversion from the topic) but it’s important to understand, as life carves out a niche for itself. Every day, trillions upon trillions of these tiny mini-reactions keep us alive.

The point is… (a) life exploits chemistry to sustain itself and (b) life transforms its environment to support itself.

So what about Mars?

Ah… this is where it gets interesting…

As I’ve documented in another post, Mars has methane, something that is surprising as methane is easily broken down by ultraviolet light, so for us to detect methane in the atmosphere, it must be replenished by some process. As best we understand it, methane is a byproduct of either volcanic activity or life. As there are no active volcanoes or flatulent cows on Mars, it does raise the question, where is the methane coming from? The odds are that it’s arising from some obscure tectonic process. ESA’s ExoMars satellite will arrive in orbit around Mars in October of 2016 to investigate this further.

And this raises another interesting point. When we look at celestial objects, we see them largely unchanged after billions of years. The Moon has craters and geological formations that span four billion years. Unless a planet has an active atmosphere and something like plate tectonics, it tends to be astonishingly stable over long periods of time.

Do you believe in coincidences? I don’t. And so that Mars is producing methane and has an atmosphere that is fine tuned to almost precisely the triple-point of water, seems to be a smoking gun for the possibility of active, subsurface microbial life.

Water can exist in three states—as a solid (ice), liquid (water), gas (vapor). The extremes we observe in space mean that often water has no choice. The environment on Venus, for example, is so hot and highly pressurized, water exists only as vapor. On Pluto, the temperatures and pressures are so low that water is locked away as ice. But on Mars, and on a few of the moons of Jupiter and Saturn, there are places where liquid water can be found. Given that this only occurs in an extremely narrow band of temperature and pressure, this is quite astonishing.

Remember those trillions of finely tuned moderate chemical interactions with free energy around 3 kcal/mol that keep you alive? They all need liquid water as a medium.

It is significant that the atmosphere of Mars is finely balanced so that it hovers around the triple point of water, the point where water can exist in all three states simultaneously (as ice, water and vapor). Coincidence? Or is this an example of what we’ve seen on Earth, where microbial life fights against geological and astronomical odds to sustain itself by transforming and moderating its own environment?

Is it really just a coincidence that the martian atmosphere has settled on a point of equilibrium around the triple-point of water? And that this has been sustained for hundreds of millions, perhaps billions of years?

Life didn’t always dominate Earth. There were points in time where life was almost completely wiped out, like during the snowball Earth phase, but life kept a toehold and fought back.

Is that what we’re observing on Mars? The last refuge of martian microbes fighting to sustain the equilibrium/habitability of their planet? It’s an interesting idea, and one we’ll undoubtedly learn more about as organisations like NASA and ESA continue to explore the red planet.

At this point, WordPress slips in some ads, so I thought I would squeeze one in as well. Here’s my latest novel, Starship Mine.

6 thoughts on “The case for life on Mars”