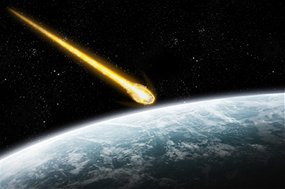 It’s somewhat ironic that, with all our efforts to find life on Mars, if there is life it may have originated from Earth.

There are currently 50,000+ catalogued meteorites, with roughly just a hundred thought to originated from Mars because of their composition, the ratio of trapped gases matching the Martian atmosphere, etc.

Some have even proposed that the Allan Hills meteorite contains fossilised Martian nanobacteria. As tantalising as that prospect is, and as convincing as the scanning electron microscopic images are, nanobacteria, itself, is controversial and unproven here on Earth (let alone Mars). To me, the images are quite convincing, as they really do appear organic in nature, but the beauty of peer-reviewed science is that it is not for me, a neophyte, to guess when there are peers equal to the task, already pouring over this subject.

But now, another alternative has emerged, and it’s one I considered as the subject of a novel a few years back (and should have jumped on it at the time), and that is that life may have been spread from Earth through out the solar system, being thrown up by large impacts like the Chicxulub impact.

Remarkably, computer models have been developed that show that… 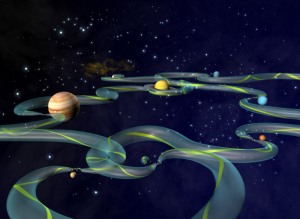 Now, you may wonder how so much can reach Pluto when so little reaches Mars and Jupiter, by comparison. The answer lies in understanding the gravity wells spread throughout the solar system (planets), with their complex paths following various Lagrange points and gravity-assisted boosts that run, like a highway, throughout space.

Achieving panspermia, with life reaching out from the Earth to other worlds, is actually quite probable, given how hardy bacteria are in a vacuum.

When Apollo 12 brought back a camera from Surveyor 3, the intention was to examine the prolonged effect of space vacuum and solar radiation on equipment. Little did they realise that, three years previous, a technician had inadvertently contaminated the camera casing with Streptococcus mitis. Much to everyone’s surprise, the bacteria could be revived.

So could bacteria from Earth, spread as the debris of a massive impact, survive for thousands or millions of years in space and be naturally revived on contact with liquids on Mars or Europa? Yes. In fact, we’ve already successfully revived yeast from the Eocene period, some 45 million years ago and made Jurassic beer (you’ve got to love science). So, as a concept, all the elements have been individually shown to be plausible.

If there is life on Mars, it may well have originated from Earth.

How would we tell? Actually, that would be quite easy. We’d recognise the DNA quite quickly and, by comparisons with the phylogenetic tree of life, would even be able to tell roughly when it split off and started an independent evolutionary branch, so we’d know roughly when it departed the Earth.

Ah… the mind boggles with possibilities…